So, it's been a couple weeks since I've posted anything here -- I've been kind of worn out by back-to-back conventions (one for fun, one for work) and haven't had a lot of extra energy for working on the game. However, today, I have a new screenshot to show. And so, since last time:

- Redid the scrollbars on the other pages after deciding that the default scrollbars just didn't work. I would have left them alone except for one thing -- I resize my content to fill the remaining available space when the scrollbars appear, and doing that led to various minor rendering issues, but the real deal-breaker was on the ship design page where not only did the scrollbar take up an awful lot of space on the component and hull views -- slightly annoying, but not the actual deal-breaker -- but it got into a nasty infinite expand-contract loop when the squeezed content was small enough not to need a scrollbar but the unsqueezed content needed one. Bleah. So I just finally took the damn thing out and implemented my own.

- Did a bunch of graphics for technologies and modules and such -- still have a few to go, but all the ones I needed for the ship design page (plus a bunch of others for other technologies) are done.

Anyway, your moment of screenshot -- have a big, complicated ship design tab (this just scratches the surface of it): 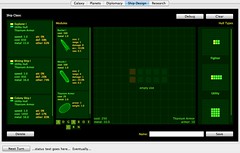 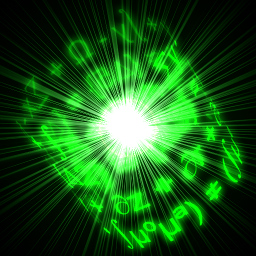 Onward to the fleet tab, probably.