Long weekend. So, since last time:

- Added a planetary display (that was pretty quick and easy -- mostly copied the code from the system display on the galaxy tab).

- Redid the buttons. I wasn't happy with the contrast (it was nearly impossible to see if a button was selected or not). Unfortunately, you can't just change the button colors, you need to replace them with a completely different type of button. I'm still not happy with them, really, but creating my own buttons would be a real pain, and they're good enough for now).

- Added the option to play various races on startup.

- Spent a good chunk of the weekend making logos for all the races.

- Added a diplomacy display, which was really what those logos were for in the first place. Also went back and added them to the planetary and galaxy displays (see screenshots for what I did). Again, another page which was largely a copy of a previous page (although this time, copied the layout instead of the content).

- Redid the research page a bit so it better matches the color and layouts used elsewhere. 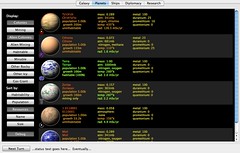 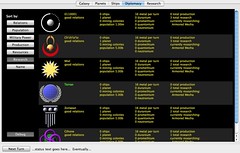