So, things have progressed slowly since my last update. I went from insomniac (read: tired but rather productive) to insomniac and exhausted (read: utterly unproductive) to now (read: um, signs cloudy, ask again later). But, in the last few weeks:

- Created the tech tree. For that, I broke down and got Omnigraffle -- although I (pretty much) had the rough outlines of it worked out ahead of time, it's still pretty complicated and I needed better visualization tools to really get it organized (and I do still tweak it from time to time, but it's mostly done): 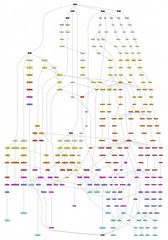 - Implemented the tech tree. For that, I'm using ruby to generate the XML/plists. It's much easier than editing the plists in Xcode, and if I need to change things, I can make quick changes to the Ruby and regenerate as needed. I also wrote a lot of code to validate the tech tree on load. 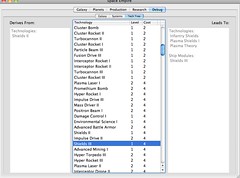 - Moved all the star names to plists (again, hello ruby-generated XML). I'm probably not done there; want to add some more names and generally clean the names up -- for one thing, I'm fairly certain there are some duplicate names in there.

- Created the ship module definitions. Also, wrote code to link them to techs properly and validate them on load.

Anyway, from here I'm probably going to work on the user tech interface, which also means I'll have to start on some of the core user code.