So, since the last update:

- Created the galaxy, i.e., figured out how the stars are going to be generated and laid out (mostly this was a matter of implementing what I'd decided to do several weeks ago, and tweaking it to make it work better). I'm envisioning various galaxy sizes from 25 to 100 stars (with up to six planets each -- this turned into seven once I actually started making the systems). This could easily change, though.

- Came up with some names for stars, neutron stars, and the central black hole. I did this the stupid way, though, and need to refactor it now that I know better (it's kind of hard-coded, needs to move to a plist). So I'll need to clean that up at some point.

- Created a debug panel for the galaxy layout, with star information tooltips (nothing fancy, the actual user navigation screen should be a lot slicker). Have a small galaxy: 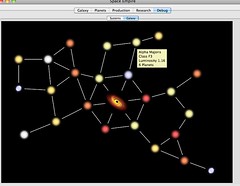 - Generated all the planets and planetary parameters; again, this was mostly implementing something I'd worked out a few weeks ago (lack of sleep has made me surprisingly productive here, since when I couldn't sleep, I'd noodle with things. Although, at times, it's also made it impossible to do much of anything, too, when I've been too exhausted). Although I did end up tweaking it an awful lot, since one I had it running, I could figure out how many of what types of planet were being generated a lot more accurately. There may be a lot more tweaking in the future, as well.

- Added more planet pictures (now that the planet frequencies were better defined), now have a total of 57. Also split the gas giant class into inner and outer gas giants with different art.

- Created a debug panel for the star systems, so I could see what they looked like (in terms of parameters, I mean, I know what the pictures look like, and again, the game navigation screens should be slicker. Among other things, the planets would be rendered at different sizes). Here are a few systems: 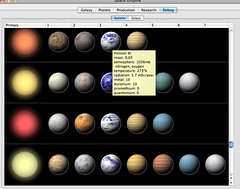 Next up, the tech tree.