So, the last week-plus I've been working on the game off and on, I think I'm actually past my first trac milestone, need to update that at some point. Everthing's pretty much in place and going now, so a (quick-ish) progress report is in order.

- More or less finished the Cocoa/Xcode development book I was reading (I haven't read the stuff on dealing with dispatch queues or anything, but I was tired of reading instead of coding and I've already covered the critical stuff. This project probably won't be compute-intensive enough to use those, anyway).

- Built the interface framework in Xcode, started on galaxy/system/planet generation code; in parallel I'm working on the debug interface. I figure I'll do my first serious interface there, so by the time I get to the user stuff it'll be a bit more polished (mostly on the code side; polished interfaces are easy to build in the Xcode Interface Builder).

- Took a break and created some art for the galaxy/system/planet views. Have thumbnails: 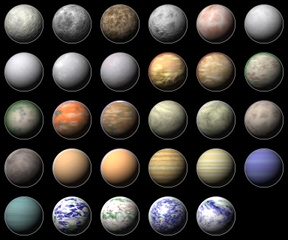 That's one star per spectral type, plus neutron stars and black holes. There are also ten classes (so far) of planets (categorized by atmosphere) but I did up several versions of each class for visual variety (at least two per class, more for common or interesting classes). Three of the classes are invented; the rest exist in the solar system (you might recognize some). I could do more easily if things felt too repetitive; all the planets and stars are Lightwave3D objects or scenes and easy to regenerate or modify.

And that's pretty much it so far.