After some trials and tribulations (including upgrading to LW10), I finally got a new version of Bad Egg finished. This one (unlike Game) I think is a clear improvement over the old one -- I actually tried to do something even more ambitious, that is, replace the yellow egg with a yellow-ish crystal egg, but the result wasn't really that good. Anyway, old one on the left, new one on the right: 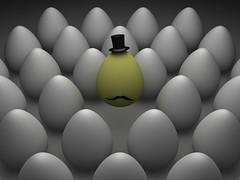 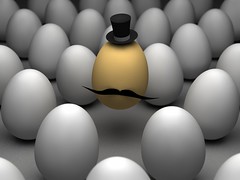 The difference in speed here is obvious and astonishing -- half an hour versus forty-two, and that tells only part of the story because I also turned the quality way up, rendered at 16 times the resolution, and threw in depth of field to boot which is probably would have added another 20 times to the render time to the old version, minimum. Part of this is the 100+ times speedup in CPU, part of it is far better algorithms (add another 20 times speedup, maybe), but... My guess is that (if it didn't run out of memory and explode) the old machine would have taken north of a month to render what the new machine rendered in half an hour.

Yes, zero lights -- both images were done entirely with radiosity using a luminous surface instead as an indirect light source. Also, I guess the old version of LW only counted distinct objects -- both scenese have the same number of those (although the new one definitely has more instances of the objects).