Here are some old pictures I took in Malaysia and Singapore on our trip to meet Ai's family in March of 2010. The sad thing was, these had been sitting on the SD card in the camera for over a year -- I only finally dumped them when I got the new iMac and Aperture 3 (which could finally read the RAW format my point-and-shoot uses). I had thought I'd at least dumped them onto disk somewhere, but apparently not. Anyway, I went through them, processed them and now they're up on Flickr.

And yes, I took a lot of pictures of orchids... I really liked the Singapore Botanic Gardens (other than the debilitating heat and humidity, of course) and I totally abused my Sophia student ID to get into the Orchid Garden for cheap.

One of the orchids: 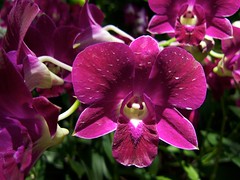 So, I've started working with LightWave3D again on the new iMac.

It has a few issues which will probably lead me to upgrade it at some point -- it has a tendency to run out of memory for no good reason (presumably because it's a 32-bit executable dating back a number of years -- it tends to run out of memory with large shadow maps and images when it's only using maybe 2GB out of the 16GB I have available. Version 10 is presumably 64-bit, however -- it seems to require Snow Leopard. It's still its cranky old self, too, with the occasional crash -- it's something to be tolerated, since I can't afford/justify buying Maya).

At any rate, since I've sort of lost the originals of some of my older renders (in that I can never re-render them in larger versions or anything, most of these are from around a decade ago), I've decided to make new versions (not exact copies, more new renderings inspired by the old one). The first one I did was "Game" (old one on the left, new one on the right): 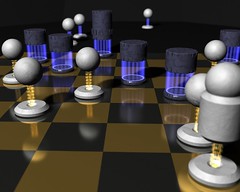 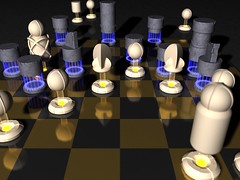 The big difference between the images is the use of radiosity on the new picture; both use depth-of-field, volumetrics and a lot of reflection. I suspect if I'd tried to notch up the quality effects to the level used on the newer version on the old computer it would have taken weeks -- assuming it actually had the memory to handle it at all. I suspect a newer version of Lighwave would do slightly better -- while the bulk of the render time was calculating radiosity, which was equally distributed over the cores, it's less efficient rendering polygons and wastes at least 25% (often more) of the CPU with it's not-entirely efficient thread scheduling.

And after all that... I'm not really sure the new version is actually an improvement (and my attempt to put a robotic hand in there just didn't work -- it looked terrible).
Collapse