I have a dreamwidth account now (a seed account, actually, to go with my lifetime LJ account). I'll probably get around to setting it up eventually, at which point you'll be seeing lots of crossposts. But not today -- and probably not for a little while. I've been much too busy with other things.

New Computer is for Aperture

The iMac is here. It's quite the beast -- but given what I'm doing with it, it has to be. With the i7 CPU and 16GB of RAM and Radeon 6790M, it's really snappy, even when Aperture is chugging away (and using up ALL of the memory and 500% of the CPU, which is quite a feat on a 4-core box -- hello, hyperthreading). And that's what Aperture has been doing all morning, importing 35+ GB of old pictures I took with the Panasonic "pocket" camera, now that it finally supports the DMC-LX3 RAW format. This makes that camera a heck of a lot more useful -- I'd gotten completely out of the habit of using it simply because it was such a pain to process the pictures.

Anyway, most of those are old pictures that I've already uploaded to Flickr, etc. Those just get sorted and rated quickly (which, given I'd already picked out the best pictures when I uploaded them to Flickr doesn't take that long). But I still have a bunch of pictures I need to go through from the summer of 2009 (Colorado, Utah, Arizona) and spring of 2010 (Malaysia, Singapore -- the sad thing is, those never even made it off of the Camera's memory card before now). Using Aperture is really a joy with enough resources on the 27" monitor, instead of being a bit of a slog like it was on the MacBook Pro (insufficient memory being the real issue there), but, well, that's why I bought the iMac in the first place. That said, rating, sorting and tagging so many pictures is still a bit tedious, so probably won't finish today.

So, when trying to come up with a name for the new iMac, Ai-chan suggested Apophis. Which I thought was great, but Anubis would be even better. So, I named the i7 iMac Anubis and renamed the i7 game machine Apophis, which I thought were a nice pair. I decided to leave my laptop alone (my Mac laptop has always been called Jet-Jaguar), but I did rename the old windows box Ba'al (I never liked the name Usajii all that much anyway). I did feel a bit of twinge renaming Gamera (the game machine), since my main windows box has usually (though not always) been called that (it had also been named Gigantor instead, and of course, Usajii was it for a while). And whenever Ba'al gets converted to linux eventually, I might rename it Gamera, but it's much more likely I'll call it Berserker (the name I've always used for my linux boxes).

Here are some old photos I never got around to uploading until now, from two summers ago, from Rinky (the Rinkai Line dolphin mascot) and Cowtobe's (uh, no idea) road trip across Colorado, Utah, and Arizona. Thanks be unto the new iMac and Aperture 3, which made finally going through these photos not so painful as it used to be (which is why it took so long).

Here they are, in Arches National Park: 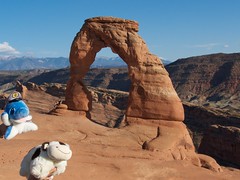