Anyway, these are pictures from the November 14th track meet in Hachioji; it was raining most of the morning, off and on (sometimes rather vigorously), but despite the difficulties that presented (like, say, you know, water on the lens), I managed to get a few good pictures, especially after it stopped. It's actually easier to get good pictures on non-sunny days, I think -- despite a bit less light, the contrast on sunny days is a bit much to deal with (beyond the obvious difficulty of shooting against the sun -- a big problem in December when the sun is low -- it highlights any chromatic aberration your lenses might have). Plus, sometimes the rain makes things interesting.

So, here we are... Not an action shot, just some of the team hanging out (I have no idea what this was reflected in anymore, though, it's been quite a while -- thing is, I have no idea how I managed to get it to look so square without being in the shot): 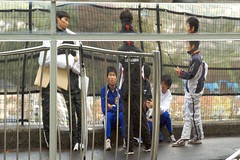 [As always, the link points to the first new picture; the rest are to the right, old ones to the left.]

More pictures from the backlog; these are from the 56th Sophia Marathon (or 第56回上智大学マラソン大会), which ran the around the circumference of the Imperial Palace last December. It was a nice day, almost too sunny for pictures, really. 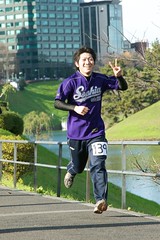 [As always, the link points to the first new picture; the rest are to the right, old ones to the left.]
Collapse