It feels like my Japanese communications skills are finally turning a corner; they still suck, of course, but it's gotten to the point that it feels like practicing my conversation skills isn't a frustrating (and completely enervating) waste of effort. I had to pick up a fair bit of grammar and (especially) a lot of vocabulary to get here, but I'm starting to be able to actually communicate (if not competently, at least effectively) on a relatively wide range of topics. Not everything (mind you), but more than (say) travel, food, and studying Japanese. I still sound like an idiot, of course, but that goes with the territory.

In other news, I found out the results of the 上南戦 (jounansen) photography contest... I got second place with: 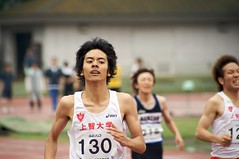 First place would have been nice, of course, but despite a fair number of people saying "you'll win for sure" I never actually expected it (I mean, really, there are a lot of students here, I'm sure there are plenty of competent photographers). I'm happy about it.

I have a grammar test tomorrow, though, so I can be happy about it some more later after I'm done.
Collapse