After Moab, we headed south to Arizona. The first place we hit (really on the Utah/Arizona border, so not quite entirely Arizona yet) was Monument Valley.

There are a lot of buttes in Monument Valley, one might even say that it's quite butte-i-full: 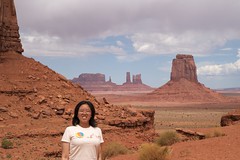 Driving through Arizona, we got caught in a dust storm. It was actually very cool, but mostly because we were safely protected in the car. I was more director than photographer for the last couple of pics here, which were actually taken by Ai while I was driving.

It was a bit dusty, even towards the end of the storm:

Finally, we reached my favorite canyon in all the world, Canyon de Chelly. We arrived late in the day, when it was raining, but fortunately as we entered the park, the rain broke, and we got some nice views, a little sun, and lots of rainbows.

A full rainbow over Spider Rock (not my actual best picture or anything, just a full rainbow. Which I'd had my tripod by then, would have maybe looked a little better in HDR with those shadows): 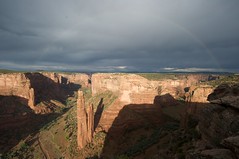 First place we went to gave us something totally awful and inconvenient. Not so bad for me (at least it was near the Chuo line), but pretty awful for Ai-chan. So we moved on and tried another agent. Turns out... Well, turns out they had something that had just been vacated the day before -- decent size, quite inexpensive (considering), and most importantly... three minutes from Yoyogi station. Um, yeah -- oh, yeah -- we wanted to look at it.

Today, pending a final bit of paperwork and such (all the parties have now already agreed), we got it. Probably helps that Ai-chan could do all the negotiating in Japanese. Probably helps that we could drop them the deposit on the spot. I'm sure it had to have helped that a Japanese friend is acting as guarantor -- I dunno if the agent went to bat for us or not, but didn't hear a thing about them being reluctant to rent to gaijin.

It's not the nicest place in the world (couldn't possibly be perfect for what we're paying -- the building is almost as old as me) but not bad, reasonably large, and, oh yeah, three minutes from Yoyogi station.

Back to the photo blog (eventually I'll catch up with all the pictures... Four more sets now? I think so, including the flower festival when I got back). Anyway... Second day (next morning) in Canyon de Chelly before we continued on. 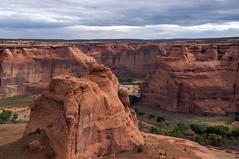 [As always, click through for the rest, newer pictures to the right.]
Collapse