Overtime win, on to the semifinals against, ah, Honduras on Thursday. Who they already beat 2-0.

Apparently, it was thrilling.

So, made it back to Gyoza Stadium and Ice Cream City in the Namjatown in Sunshine City again yesterday for the first time in (almost nearly) two years. Of course, much gyoza was consumed, and strange ice cream acquired (although not sampled until after, and not yet eaten), and even some DDR played (but not in Sunshine City). It was a lot easier navigating the food this time with random (mostly Japanese) friends and a stronger command of the language.

Look on my ice cream, ye mighty, and all that (annotated for your pleasure): 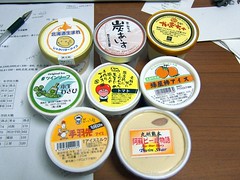 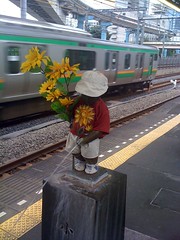 Also, unrelated, my new favorite station name is 西葛西 ("nishikasai") on the Tozai Line (literally "east-west"). The reason it amuses me is that while Japanese words and names tend to avoid mixing "on" and "kun" readings (that is, Chinese and native Japanese pronunciations of characters -- tend to, that is, it's obviously not a hard-and-fast rule), this one not only has both, it has both readings of the same character.

This displaces my previous favorite station name, 上飯島 ("kamiiijima") on the Oga Line in Akita Prefecture. But I just liked that one because it sounded (and looked) silly.
Collapse