Four goals on the fourth of July in the CONCACAF opener. Nothing much to say here except they should have beaten Grenada and they did. Honduras on Wednesday will probably be more interesting.

Well, finished up track season with the last practice yesterday, as well as the welcome party for the 一年生 (first year students, freshmen). Which technically included all of the 留学生 (foreign students) even if we were all older, being Juniors and such from America and other places, as well as, well, me.

It was pretty typical for this sort of thing, with a lot of speeches and the like, but also good food and such. And everybody wearing suits, which is a pain this time of year. :|

I didn't run that well in practice, which was disappointing, but it was really hot and humid, and I'd beaten myself up "running" about 8km during the Tuesday practice (not all at once, and okay, there was a lot of limping/walking when I cramped up, but still, wasn't a bad workout). I actually couldn't walk at all the next day, my foot hurt so bad (just bruised or whatever from the impact, not strained or broken or anything), but by Thursday it felt pretty much completely fine. Go figure... I thought I'd be limping for a couple weeks, so not complaining about that. Still, it was good that we skipped practice and had a team meeting instead on Thursday.

Can't really think of much else. Been shifting my study from physical note cards to flash cards on the computer, which is taking up a lot of time, but the physical cards were getting a bit unwieldy as the vocabulary and such we have to know has been growing. I have finals coming up here soon, and I feel like I've been faltering a bit -- I'm really starting to forget things (vocabulary, grammar) as I learn new things.

Anyway, a few completely random pictures off the iPhone: 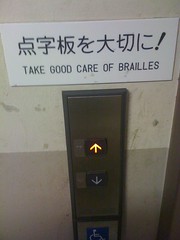 New pictures to the right, as usual.
Collapse