Hmm, fourteen pages of homework this weekend. That's, ah, a little more than usual. And doesn't count any studying for tomorrow's quiz. Gah. Also, the 梅雨 has commenced... Took four days into the rainy season to actually get any rain (er, how do they decide it's rainy season if it's not raining?) but it's been really muggy. I hate Japanese summer already. :(

No doubt everyone has seen the 上南戦 pictures already. Obviously, there was a 上南戦 last weekend. I didn't run or anything, but, well, yeah, pictures. It was entertaining and fun, I think, but I honestly don't really have that much to say about it except, well, look at the pictures.

Saw Star Trek. It was okay, nothing special. Went to Denny's... It was everything I heard it was -- exactly the same as in America, only swap Japanese comfort food for American comfort food. Somewhat bizarre, frankly, and not really that good, but there you go.

Got buzzed by a pigeon in Ikebukuro. Also, forgot my bag in Ikebukuro, which led me to say 紙袋で池袋を落としました。 Well, it amused me, at any rate. And it's better than when I said かえるがかえるかえるがかえる, but then I just wrote that, too, didn't I? 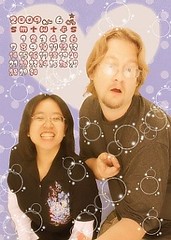