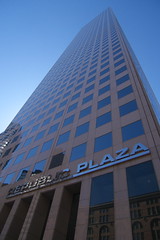 Given the fact that I hadn't trained (at all) since early November and was sick (not super sick, but still with the sore throat and mild, mostly-ignorable crap in sinuses left over from my cold), you'd expect that something like the Run the Republic (a.k.a., climbing the stairwell in the tallest building in Denver, or at least 53 of the 56 floors) would be something of a disaster.

But actually, it was pretty easy -- but as you can see by my time (see subject), I took my time about it and just walked it up fairly slowly. It was somewhere around the bottom 10% of finishing times, but I didn't care -- sick, you know, just happy not to cough up a lung. With some training, if I'd been healthy and I'd pushed, I could probably have easily trimmed a quarter of my time off. Maybe even a third.

It was actually easier (for a number of reason, probably) than the building I work in, which is 36 floors -- not least of which is the fact that it was well-ventilated and recently mopped. Our stairwell is a dusty hell, and given that even this aggravated my cough afterwards, well.

Anyway, had a surprisingly good time with the team from work. And got a medal. And a t-shirt (not one of those punk white ones, either, I like this one, it's nice dark blue longsleeve shirt).

Don't have pictures of the group yet (those will probably get posted on Facebook), but I'll probably post links here whenever they get uploaded.
Collapse