The day after I went to Obama City, I heading to Hiroshima, where I would stay the next couple of days. On the way, I stopped at Himeji to see the famous (and spectacular) castle. Which was really spectacular. I got there early in the morning (too early, maybe nine and things opened at ten), and it was really nice castle-viewing weather, so I spent a few hours there.

After that, I heading farther along on the Shinkansen to Hiroshima, and got there early enough in the afternoon to see the Peace Memorial Park and Peace Memorial Museum.

A view of the iconic castle: 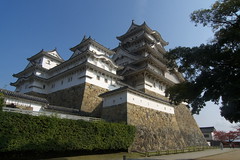 [Click through for the rest, obviously. Pictures start from the link to the right, older pictures are to the left.]

Some random Lego noodling -- I put together the self-propelled Lego AT-AT last weekend, and today, finally got around to making a video of it:

There's also a picture of it partly assembled.
Collapse