Pictures from Japan, Part I: from Denver to Obama (via Osaka).

Here are pictures from the first part of the trip. I flew into Osaka this time (via SFO), and spent the first full day wandering around Osaka (I crashed pretty much right after dark, which is early this time of year). Main places I visited were Osaka Castle (and the park there), the huge aquarium in the port district (Kaiyukan), and the Umeda Sky Building.

On day two, I exchanged my rail pass at Shin-Osaka station (which I'd actually scoped out the day before wandering around on the subways), and headed off to Obama City on the west (well, north there) coast on the other side of the island from Osaka.

There was some sort of Chrysanthemum festival going on at Osaka Castle the first weekend I was there -- not sure if the flowers here were part of it or not: 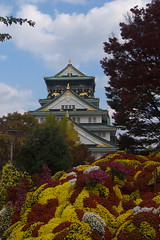 [Pictures start from the link, click through for the rest, obviously. Depending on when you read this, there may be more pictures -- I'm uploading them in batches -- but I'll post here when I do.]
Collapse