So, I wanted to take out the D700 and give it a workout (and, well, test out some lenses, namely the 80-400mm lens). I decided to go to City Park and take pictures of the canada geese (since they were obviously out in force in Denver). While we were there, my friend Damon (who had forgotten his camera -- doh!) and I decided to go to the zoo and take more pictures.

Unfortunately, it was free day at the zoo.

Nevertheless, I took a number of pictures, and uploaded some up to Flickr.

Some of them came out pretty well, I was particularly surprised at how well the pictures of the Jaguar came out through the cage (you can still see the out-of-focus cage in the foreground a bit, but it looks okay): 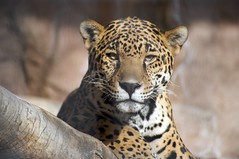 ...Anyway, bunch more pictures past the picture/link there.
Collapse