...Anybody who was at Denvention.

Okay, pretty much every single pictures is from the mountains, but pictures there be.

I think this is probably going to be it for my WorldCon report, such as it is. I was there. I worked a bit in con suite. I saw a lot of people. I hung out with a bunch of those people. I was dragged onto the beer panel by Wil. I drank a lot of beer -- some of it immediately after the panel, not quite as much other days.

And here are some pictures, mostly for the people who were there to see them; presumably soon-ish, I'll get to see their pictures, too. :) 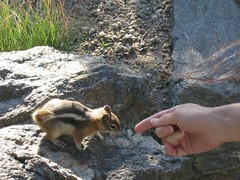 Still tired, suppose I'll recover eventually. Still need to catch up on email, and back to work tomorrow.
Collapse