Well, made it up to Rocky Mountain National Park (finally) with Damon.

Good news is that I'm in a lot better shape than I expected, didn't have any trouble getting up to Emerald Lake (so I'm in much better shape than I was this time last year). Bad news, of course, is that I'd got back all the weight I'd lost this year by the end of the year, so, uh... Hope I can drop it again, and maybe a bit more than before. But I already knew that part.

Still couldn't find one of the baskets for my old poles, even after pretty much going through/cleaning up the whole apartment (found the rest of my snowshoeing/hiking gear, though). Apparently the cat is really good at losing stuff for me. Besides, I'd been having trouble with the old poles (they weren't locking consistently anymore, and, and)... So we picked up new poles on the way up. Which are nice, but I can't seem to figure out how to lock the upper part, so can't get them full length. I guess I'll RTFM here sometime.

It was a great day for snowshoeing. Not as windy as it could have been (it's pretty much always windy on this side of the divide this time of year), warm, and plenty of snow. Only problem was I couldn't really use my 4WD getting up there. Ah, well. Maybe next time. :)

Did see some really friendly birds (gray jays) that actually stole food out of somebody's hand when they weren't looking. I taunted them a bit by holding out food then pulling it back, which was bad of me. I guess the birds held out hope I'd actually feed them, since they didn't poop on my head or anything. :)

There were some other wacky things going on today (like the kinda rowdy group that shouted "game on!" when we passed them, but apparently gave up racing us at Dream Lake, since we never saw them again -- we went up the stream and they went up the side of the valley, so they were apparently surprised that we'd gotten well ahead of them without, you know, actually passing them. Apparently, it broke their spirit or something).

Here I am, covered with snow after I fell on my ass -- okay, really my face -- screwing around in the deep powder: 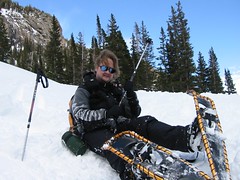 It's okay, though. I just fell down. Damon actually fell through some ice into a stream.