Went to be early last night, woke up really early, too. So I took pictures of the sunrise. It being Colorado, it was one of those crystal-clear mornings, so the pictures don't look like much -- but it was the first sunrise of 2008, and I was awake to see it.

The interesting pictures were the ones the sun cast into my apartment (newer pictures to the right if you click through): 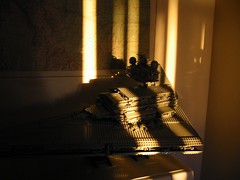 I also uploaded pictures of my car (both "before" car and "after" car). 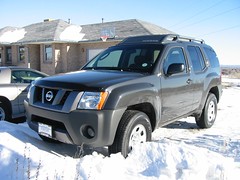 The rest of the set is past the magical mystery link, of course. Note 若葉マーク on back (or 初心運転者標識 for people like me who really like long strings of kanji).

So, Chris says I should have a contest, and whoever sends me the best prize gets to name the XTerra. While I kinda like that idea, I think I'd rather have final word on the name, especially since I doubt y'all would send me anything cool anyway. :-P

I never did name the Civic, even though I thought about it several times. It never told me its name, though, so...

For the record, I've decided that the car is more or less a he.
Collapse