Anyway, two reasons for bailing... The weather went south early today (although it cleared up a little later, it never cleared up completely, and we didn't really feel like getting rained on). The other reason was that I was feeling a little... Sore (but more on that anon). Anyway, total time was about eight hours or so, because...

I messed up my knee. I didn't really know until I'd gone down about a thousand feet or so, but I sorta had a feeling, as my knees were feeling a bit sorer than I was expecting. Not the "oops, overpowered it, man that hurts, but I'll just be sore a couple days" but the sort of repetitive stress injury I used to get about six years ago. The sort of thing where it doesn't matter whether you put weight on it, it hurts to bend it (or extend it) at all. Which sucks, and makes me a bit worried about the whole Fuji thing, but the good news is that it feels a bit better now (maybe the ibuprofin actually helped, but it sure took a long time to kick in if so), and I've got two weeks to rest it. Dunno. Clearly something to be worried about, but probably happened because of climbing close to 6,000 feet in the space of two days (a lot of that over loose boulders and such), and I'm pretty much done doing that for the year, what with the Wisconsin trip this weekend, the Japan trip after, and summer being done after that and all.

Eh, well. Wasn't a terrible day, added rabbits, pika, and mountain goats to the weekend wildlife tally, which is cool. Even got pictures of some (follow the link, as usual). Also, wore a tie (but that's a long story). So, pictures: 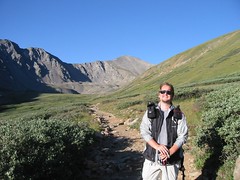