Round trip was about 4700 feet net vertical and nine miles, to an altitude of 14,440 feet (the highest point in all of Colorado and the Rocky Mountains. Only two states have higher points, and California's is a bare 65 feet higher). Took almost twelve hours (it was a long, long day), almost seven of those climbing.

Weather was good; had a bit of cloud cover when we first got to the peak (just one big ugly cloud, everything around us was mostly sunny -- and it blew off while we were still up there), and some sprinkles at the very end -- normally we probably would have gotten thunderstorms by then, so we got off lucky, but down in the trees, that would only have been mildly annoying.

However, my knee (which hadn't given me any real trouble all year) virtually imploded on the way down. Fortunately, after popping a couple ibuprofin and with a good long stretch of flat on the Colorado trail stretching it out, it mostly recovered, and today it feels fine. Hmmm. At its worst, though, I'd decided to swear off fourteeners forever (and was swearing quite freely in general -- my mood was in no way a positive one), but after we made it back to the car and got something to eat, I was feeling a lot more optimistic.

That said, it's quite possible that was my last fourteener of the year, and almost certainly the last new one -- I've done all the easier ones, and despite my efforts (diet, and god knows I've gotten enough exercise), I've been unable to drop any significant weight this summer (and I really need to drop about thirty more pounds or so). I've probably converted a bit of fat into muscle, but that's not going to help my knee that much, since it's not really a strength issue (although it doesn't hurt), it's more a joint issue (my knees aren't straight).

So, even though Damon (might) have another free day in a couple weekends, I'm probably going to back off quite a bit and spend more time on slightly easier hikes instead of shooting for Massive or something. That was a really long day, and enough pain for a while (not to mention the whole "getting up at 2AM" part). Then again, I might change my mind...

[Oh, also, secret message to Dusty: I finally tried the gel insoles, and uh... They were a lot less comfortable than the (foam?) ones I normally use, and my feet were not happy about it. I'll be replacing them as soon as I can make a run to REI to pick up a new set.]

Some crazy person holding up an inaccurate sign at the summit: 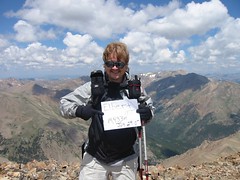