So, climbed Mt. Evans today -- the closest fourteener to where I live, but only the tenth fourteener I've climbed (and it's not exactly a difficult one, either).

It was probably about the easiest fourteener I've ever done, and I'm completely sore and exhausted -- it really didn't seem so hard at the time. We did the Summit Ridge route up, and took the road down, for probably about seven miles, and maybe just shy of 2000 feet of vertical; hard to be entirely certain, though. A little fairly trivial bouldering in spots, at least once because I went the wrong way before realizing the trail went somewhere else. Probably took about six or seven hours round trip, but we didn't keep very good track, so it's hard to be really sure. We were pretty leisurely about things today, though.

Instead of being hot, this week it was windy (which equals cold). So, never zipped off the pants legs, and wore a jacket for the bulk of the day (I did take it off for a little while, before deciding that was a bad idea and put it back on).

Saw a whole bunch of mountain goats all over the place (and marmots and such, too), especially in the Summit Lake parking lot where we started. Got a few decent pictures of same (click though to see the rest of the pictures, of course):

Mountain goat against the sky: 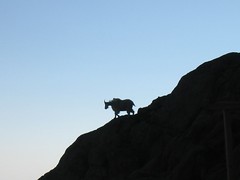