Was feeling better yesterday, and fine by the time I went to bed last night (did I not mention that I was feeling crappy? No? Well, let's just say, going to the party I went to on the 4th wasn't a mistake, so much as eating then. I'd been feeling iffy since the day before)...

Anyway, felt fine. Went hiking. Climbed Flattop Mountain in Rocky Mountain National Park (er, 8.8 miles round trip, 2,849 feet vertical gain, to an altitude of 12,324 feet. A slow five hour to five-and-a-half hour round trip). A reasonably difficult hike, vaguely equivalent to the top part of Fuji, I guess. It made me tired (and the more I do this, the more I think I should just be lazy and start at fifth station, not Fuji-Yoshida proper).

Was a bit late getting to the trailhead (9AM -- I'd slept through my alarm and woke up an hour late) but got back okay despite being a little worried about that; only felt a few drops of rain near Bear Lake right before making it back to my car. It rained a good bit of the drive home, though.

I saw a snake at about 10,400 feet, which surprised me greatly -- I know that the range of the rattlesnake doesn't get above 8,000 feet or so, so I assumed that was true of all snakes. Apparently not.

Kinda forgot my sunscreen. Burned a little bit, but I think it'll mostly turn into tan.

There are pictures, of course. Also, figured out the macro on my camera, so got a couple decent bumblebee pictures up in the tundra. As usual, click through for all the pictures: 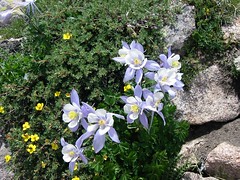