Well, today I went to Rocky Mountain National Park, where, as usual, I hiked a bit past my endurance. Also, it's gotten hot, even up there, and I didn't pack enough water. Or, actually, do a very good job of packing my backpack in general, forgetting a couple of other things, too (which, fortunately, I didn't need).

Anyway, did a 4.5 hour hike, er, maybe ten or eleven miles total. Bear Lake, Nymph Lake, Dream Lake, Emerald Lake, back around Dream Lake to Lake Haiyaha, down and around to the Loch, and back to Bear Lake. No idea how much vertical, but there's not a lot of flat in that part of the park, so it was probably a couple thousand feet or so. Never really got that much over 10,000 feet -- even if I'd had the energy for it (I didn't), the snow started to make things difficult as you approached treeline (there's still a bit left in a few places, but given how hot it was, it won't last much longer). I'd sorta been thinking about trying for Andrews Glacier, but heard it was impassible up there without an ice axe and possibly crampons, and I hadn't packed one (I don't actually have crampons, nor was I wearing the winter boots, which are crampon-compatible).

Also, I seem to have sunburned my neck again, but apparently nothing else.

Anyway, as usual, pictures past the link here.

Dream Lake, the shiniest lake in the park (also, not an impossible hike up there, although it isn't entirely trivial, either, if you aren't acclimated to the altitude): 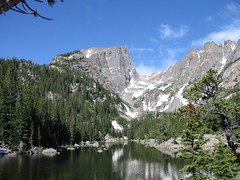