Watched the game on DVR delay.

I think they looked a bit sloppy (they gave up a couple of chances due to poor defensive play, including the one goal), but they also fairly clearly outclassed the Panamanian team, so won anyway.

Next game is against Canada on Thursday.

Went up Thursday and Friday nights (came back for a meeting-type thing on Saturday). Still tired; stayed up late, you know, for the astronomy thing, and got woken up early by the boy scouts that camped right behind me. Would have been tired anyway; even in the shade it gets too hot to sleep in a tent after about nine or ten this time of year, but. Was going to get up early this morning to go hiking -- obviously, that didn't happen. Might go later today, might not, depending on the afternoon/evening weather (wouldn't want to go until it cools off some).

Anyway, the good: not as dry as previous years, so the wildflowers were back in reasonably spectacular form (the drought is pretty obviously over). Weather was nice -- could have actually used more rain than we got, maybe (we got a few drops, and that was about it), to keep the dust down and such. Saw a lot of people I hadn't seen in a while (I missed last year due to a wedding). And it's always nice to go up into the mountains for a couple days.

The bad: both nights were hazy and next to worthless for actual observing (apparently it got better by 2AM Saturday night, but I'd already gone to bed, and apparently the dew/frost was particularly bad by then). It was way too crowded this year -- apparently the forest service moved us to a much smaller site, and we weren't allowed to park off the road, so everybody was jammed together, and the dust was particularly bad. And, of course, the boy scouts set up right behind me.

Anyway, took pictures (follow the link for the whole set):

My car, it collect the dust: 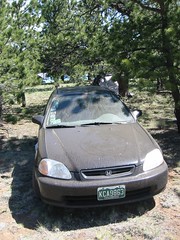 Sentences patterns. Broken examples. More of the usual. I sorta got these down already, or I might if I ever used them, which I pretty much don't. At least the not-as-polite forms.

Um, those are some weird sentences.
Collapse