Man, the place is green this year. 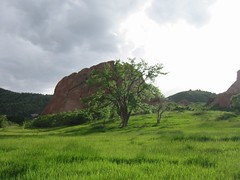 Incidentally, this is also a particularly moving bit of music.

First, Wisconsin. This is for Evan, mostly:

I'm flying into Madison direct from Denver: I'll be arriving at 1:39PM on Friday August 17th, so a late lunch is possible before I drive on up to Rhinelander. I imagine I'll be swinging back through Sunday afternoon/evening... Flight out is 9:12AM the next day; current plan is to have a rental for the duration.

Wish I'd had money two days earlier, as the price of my tickets went up $250 between Monday and when I made my reservation on Wednesday (grrr). On the good side, that meant that the price for a Wednesday departure went up to the price that the Thursday departure was already at, so I got the date I originally wanted, and flying 777's instead of a 747. I think. Unfortunately, this itinerary isn't showing up on the the web site (since I made the reservation by phone to get the convention discount), although I suppose I could look up the flights themselves. Too lazy at the moment, and well... It ultimately doesn't matter that much.

Anyway, flying out August 23rd (early), and returning afternoon of September 11th (afternoon). Both connections in Seattle this time. Of course, the plan is to adjust a couple days and climb Fuji-san before the convention, then abuse a JR Pass afterwards (with the current plan of going to Hokkaidou via Touhoku). I'll post something more detailed by and by.

A long time ago, I really decided I liked this particular Bach composition -- of course, I'd only heard it on some Amiga music program back in the day, but it was catchy, and at one point I set out to find it. I had no idea what instrument it was written for originally (organ seemed likely, although I wasn't certain), or really where to find it (it didn't help that I didn't even remember the key for sure. And it's not like he didn't write several other fugues in this key. Or any key you care to choose). Of course, I never did find it, until recently. And completely by accident.

Well, it just happened to be on this one CD of organ music I ordered a while back and integrated into my music library some weeks ago. Which makes me glad that I got the CD, even though it had several pieces I already owned, and I had no idea if I wanted anything else on it. But, being on the organ kick I was on, I went ahead and got it.

And there it is. Yay.
Collapse