Went hiking today with a couple friends. Weather was pretty good while we were there (although it's been threatening since, it's mostly been a tease).

Anyway, took a few pictures. Mind you, these are from the best hike in the park (which goes up to the "top"), which is not to say they're from the most scenic part of the park (which is down in the middle of the "rocks"). Also got a free poster of the park (it's the 20th anniversary of the park's founding -- the poster has a John Fielder photograph of the park on it, and he even visited the park yesterday. Unfortunately, I didn't know anything about it, so I missed all of that).

As a bonus, a rare picture of me with short hair. 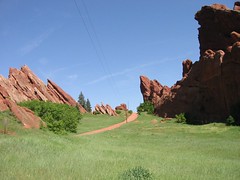 Well, time to get things done. Errands to take care of, work to do.
Collapse