So, uh, we have a new house. And I took pictures with the SLR for the first time in, what, two years? 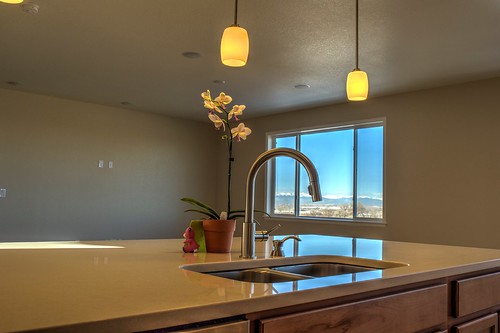 So, haven't posted here in a long, long time. Mostly because the game stuff has moved elsewhere (here for one), and haven't done any photography worth mentioning in a while.

It's not like I've been particularly active online anywhere in quite some time, anyway.

But, if you want to see at least one thing I'm up to these days, follow the link above. Otherwise, it's probably back to mostly quiet around here.

It's actually been out for a couple days, but the last couple of evenings have been hectic; Tuesday there was a Muse concert and Wednesday there was an indie game dev meetup (and then there was this Football game tonight, but at least that didn't require actually going anywhere). And then there were some other complications, what with iOS 7 coming out yesterday (though the app itself seems fine).

Sales have been... Not bad. We might actually be in the black in a couple of days (not that our expenses have been great).

But it's done! Which is a heck of a relief, even though I have a couple bugs to fix (and some other enhancements I'd like to make -- but no crash reports at all yet, knock on wood). So, I'll be trying to finish all of that off this weekend so I can get a new version submitted.

I'm much happier about everything now that (hopefully the hardest) stage is finally done.

...And pretty much the same content on the "official" web page (same description, better versions of more screenshots).

At any rate, it's done (which doesn't really mean I'm done -- I still have to port it to iPad, support it, fix bugs, what have you -- it just means that it's good enough to release and is about as feature complete as it's probably going to be for a while).

While I was waiting on the approval from Apple, I was reminded of why I started this in the first place: I started working on a new game while TSC was on hold pending the outcome of the App Store review. That part is fun... Actually building a game is fun. Design is fun. Implementation is fun. Fixing bugs isn't always fun, but it's satisfying when you finally track them down and kill them with fire. Debugging is a fundamental aspect of programming anyway; if you can't stand that part, give up, you're not really a programmer. Testing can get really tedious after a while, though. Eventually you will get sick of playing your own game; that makes it really hard to judge how things are going after a while.

...There are a whole bunch of things that aren't any fun at all, though. I.e., the actual release part. All the legal agreements. Navigating the long, involved submission process, carefully making sure you don't mess anything up. Getting your screenshots just right (well, that part isn't so bad I guess, not at first), then realizing they aren't presented quite the way you expected. Writing the best "ad copy" you can for the description on the web page and the App Store page. Waiting.

Of course, now some even harder parts happen, i.e., supporting your app. Having users can be a scary thing. Will they break the app? How will you fix it? Crash reports are nice, but maybe the game is just doing the wrong thing and you never see it -- this bugger's complicated, after all. And you never know if they'll savage you in reviews for no good reason (or worse, for good reason).

If it sounds like I'm complaining... Well, I am. But it's also pretty exciting to be done and have something to show for it, so it's not all bad. A weird sort of mix, really, not what I expected when I started, exactly. And bottom line... There's something out there I can point at and say is mine.

So, there's a game. That I wrote. And you'll probably be able to buy it soon (at least, if you're on OSX. Soon being a couple months, maybe September, but we'll see). In the meantime, it has a web page and all that. You can see screenshots. They're... Well, you know, they're screenshots.

It's been an interesting few months writing it.

As you'd expect, the fun part is the beginning. Coming up with a concept, putting the basic framework together. Planning. Seeing it render anything for the first time. Seeing it play itself (since, of course, it has various testing modes that I can turn on to check things out -- there's no way you can playtest everything all by yourself, and after a while you are going to get sick of playing your own game anyway. Still, watching it play itself is a bit like watching Conway's game of life for the first time).

There are still fun parts along the way... Seeing the interface come together. Seeing the gameplay get smoother and smoother. Optimizing this and that. When the AI finally beat me for the first time. When the AI not only beat me but did it in a completely unexpected way. (As an aside, it's really hard not to take the AI into account during playtesting knowing everything you know about it because you wrote it. It's hard not to take advantages of weaknesses you know it has, knowing as you do how to manipulate it -- but when it beats you in a way you didn't expect anyway, well, that's something amazing).

But... There are not fun parts, too. Dealing with all the bureaucracy involved with becoming an Apple developer. Dealing with the business stuff (fortunately Ai-chan is there for that). Fixing subtle bugs that are almost impossible to duplicate. Dropping features you liked because they just don't work or they're too complicated to implement or use. Rewriting the AI from scratch and breaking half the game in the process. Trying to figure out why stuff that worked before suddenly doesn't when you rewrite the AI -- but doesn't seem to have anything to do with the AI in the first place. Rebalancing everything for the tenth time when you discover some subtle-yet-major bug that completely invalidates your previous game balance testing. Just working on it (after spending all day doing your day job -- always the priority, even when it's not as much fun -- sometimes it is, and sometimes it ain't, but you got to eat and pay Ai-chan's grad school tuition somehow) when you're tired of working on it and all the fun parts are done anyway. And, you know, writing those parts you don't care that much about but need to do anyway (say, the documentation you still haven't written).

At any rate the game's been code complete for a couple weeks (the last major feature being that whole game save thing some people, you know, might want). Of course, that doesn't mean you're done -- not even close. It just means it's time to go to beta, see if you can scrounge up people to test it (anybody else want to be a beta tester?), and spend the next few weeks fixing bugs. And, oh, yeah, write the docs. And a proper tutorial scenario, because your quickstart thing kinda sucks.

And then port it over to the iPad, which was the original goal of the exercise because that's where the real market is. And then, maybe next year sometime, you might get your weekends back.

And then turn around and write another one (or two, or three) because chances are the game won't make enough money to be worth the effort anyway (also in the category of not fun things: marketing), but if you keep chugging at it, maybe something will stick in this, your third stab at a creative career (since you've long since decided that writing and art isn't for you).

Anyway, back to that whole rebalancing and playtesting thing I might have mentioned.

Getting fairly close to done, actually. The game is almost playable, but needs some serious balancing and a fair bit of polish. 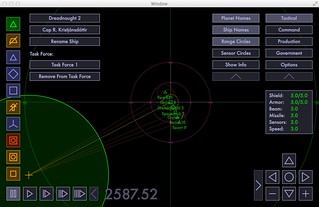 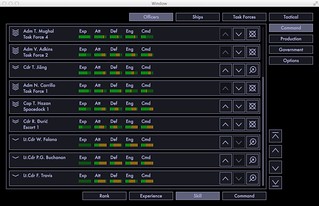 The interface is starting to form up a bit. 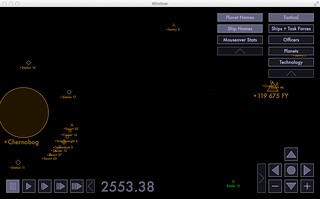 [Coming off a retina display, it's a pretty big picture.]

Ai-chan and I hiked up to Hanging Lake weekend before last, and on the way, I got a few pictures. It's a beautiful place, but alas, overrun with idiot tourists being about as stupid and annoying as you could possibly imagine. A shame, really, sooner or later they'll finish destroying the place.

Anyway, here are some pictures, starting with a picture of the lake itself: 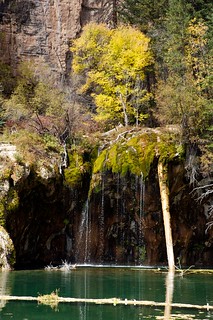 [The rest be reachable by the clicking o' through.]

Another set of pictures; this time from a pair of hikes Ai-chan and I did in Rocky Mountain National Park in September when the aspen were changing. 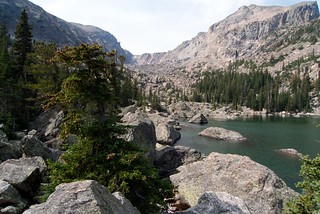